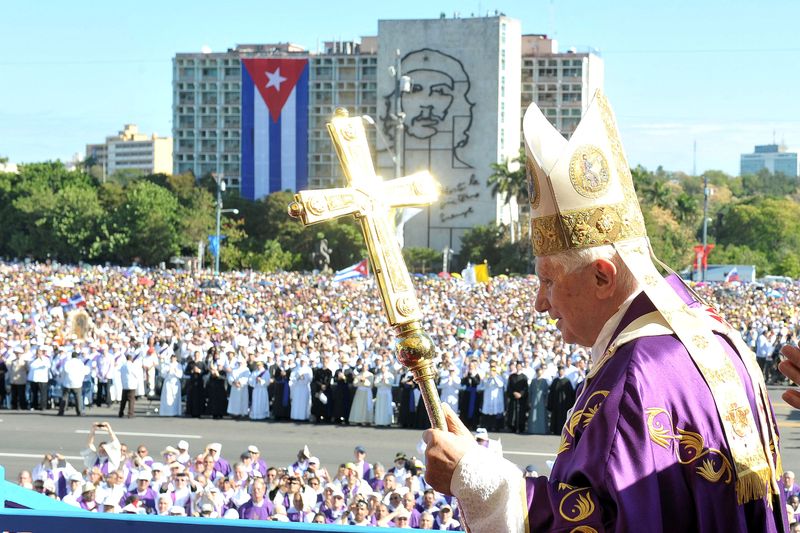 VATICAN CITY (Reuters) – Former pope Benedict, who died on Saturday, was the first pontiff in 600 years to resign from the post rather than rule for life.

Here are some facts about 95-year-old Benedict and his papacy.

– Benedict, the first German pope in 1,000 years, was elected on April 19, 2005 to succeed the widely popular Pope John Paul II, who reigned for 27 years. Cardinals chose him from among their number seeking continuity and what one called “a safe pair of hands”. For nearly 25 years, as Cardinal Joseph Ratzinger, he was the powerful head of the Vatican’s doctrinal office, the Congregation for the Doctrine of the Faith (CDF).

– An uncompromising theological conservative, Ratzinger left Germany and his post as archbishop of Munich in 1982 to head the CDF. His disciplining of Latin American priests who promoted Marxist-influenced Liberation Theology bestowed him with the sobriquet “God’s Rottweiler”.

– A weak administrator who admitted a “lack of resolve in governing and decision taking,” his eight-year papacy was marked by missteps and a leaks scandal. He antagonised Muslims by appearing to suggest that Islam was inherently violent. He angered Jews by rehabilitating a Holocaust denier and prompted international dismay by saying the use of condoms in the fight against AIDS only worsened the problem. The 2012 “Vatileaks” scandal helped unravel his papacy. Paolo Gabriele, Benedict’s butler, leaked secret documents that revealed corruption and feuding within the Vatican. Benedict said he stood down because bad health prevented him from bearing the full weight of the papacy.

– Child abuse scandals hounded most of his papacy but he is credited with jump starting the process to discipline or defrock predator priests after a more lax attitude under John Paul II. He ordered an inquiry into abuse in Ireland, which led to the resignation of several bishops. He disciplined the late Father Marcial Maciel, founder of the Catholic order the Legionaries of Christ and one of the Church’s most notorious predators. The Vatican under Pope John Paul II had failed to take action against Maciel despite overwhelming evidence of his crimes.

– In 2022, an independent report in Benedict’s native Germany alleged that he had failed to take action in four cases when he was Archbishop of Munich between 1977 and 1982. The frail former pope acknowledged in an emotional personal letter that errors had occurred and asked for forgiveness. His lawyers argued in a detailed rebuttal that he was not directly to blame.

– Although he promised to keep a low profile after his retirement, Benedict wrote, gave interviews and, unwittingly or not, became a lightning rod for conservatives who opposed Pope Francis. Some loyalists failed to accept that he had resigned the papacy willingly and continued to consider him “my pope”. The “two popes” confusion was compounded because he chose to continue wearing white and be known as “pope emeritus”. The resulting polarisation led to calls from both conservatives and liberals for changes in Church law to regulate the functions and status of former popes.

– Benedict produced more than 60 books between 1963, when he was a priest, and 2013, when he resigned. “In reality I am more of a professor, a person who reflects and meditates on spiritual questions,” Benedict said after his resignation.

– He played piano and had a preference for Mozart and Bach. As a classicist, he frowned on rock and roll as an “expression of base passions” and once called popular music a “cult of banality”. Pope Francis, by contrast, also loves classical music but appreciates Italian pop songs from the early 1960s and also likes tango music from his native Argentina.