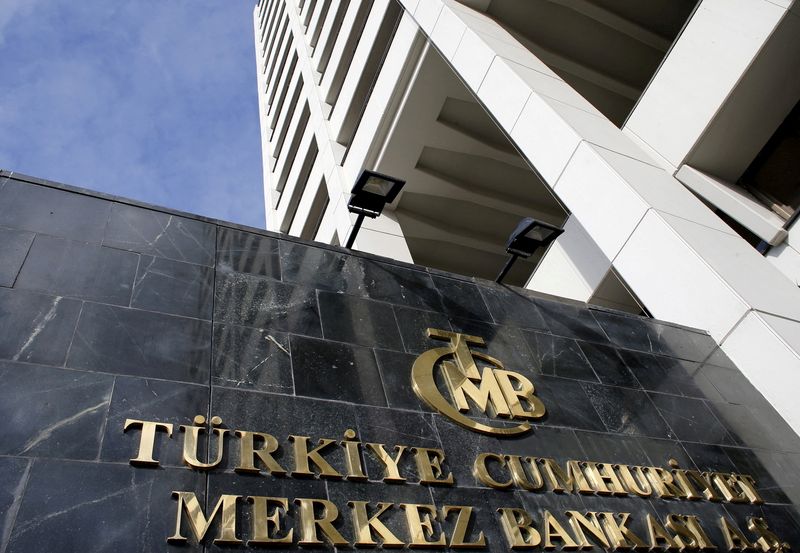 By Nevzat Devranoglu and Ezgi Erkoyun

ANKARA (Reuters) -Turkey’s central bank said on Friday it aims to lift the share of lira deposits to 60% of all deposits in the banking system over the next six months, and vowed to continue using regulations to support access to credit.

In its annual monetary policy report, the central bank said it was maintaining its long-held 5% medium-term inflation target, as the annual inflation rate begins edging down from a 24-year high above 85% in October.

“Policies will continue to be used in order to permanently increase the weight of the Turkish lira on both the asset and liability sides of the banking system,” the bank said.

The central bank, which has undertaken an “liraization” policy of stabilizing the currency pressured by its interest rate cuts, repeated it had no exchange rate target level and would not buy or sell hard currencies to direct the lira.

Inflation has surged since autumn 2021, stoked by an unorthodox monetary easing cycle that President Tayyip Erdogan pushed for to boost economic growth and investment, but which sparked a historic currency crash late last year.

A year ago, hard currencies accounted for some 65% of all deposits in the banking system, reflecting years of lira depreciation and high and volatile inflation rates.

But after dozens of regulations were adopted in 2022 meant to dissuade foreign currencies’ use – including state-backed depreciation-protected lira deposits – their share has fallen to 47% of all deposits as of last week.

The lira, propped up by indirect foreign exchange sales to the market, has steadied since August, while inflation is expected to fall sharply next year with economists predicting it will dip to 40% by the time Erdogan faces tight presidential and parliamentary elections, expected in June.

The central bank also said in its report that it would ensure a “steady” increase in international reserves in support of the lira.

Analysts expect the current 9% policy to remain steady until the election, after which it will depend on whether Erdogan is re-elected. The opposition has promised a return to orthodox policies and rate hikes.

For 2022, the central bank expects inflation to drop to 65.2% by year-end, thanks largely to base effects in December, compared to a median estimate of 69% in the latest Reuters poll.