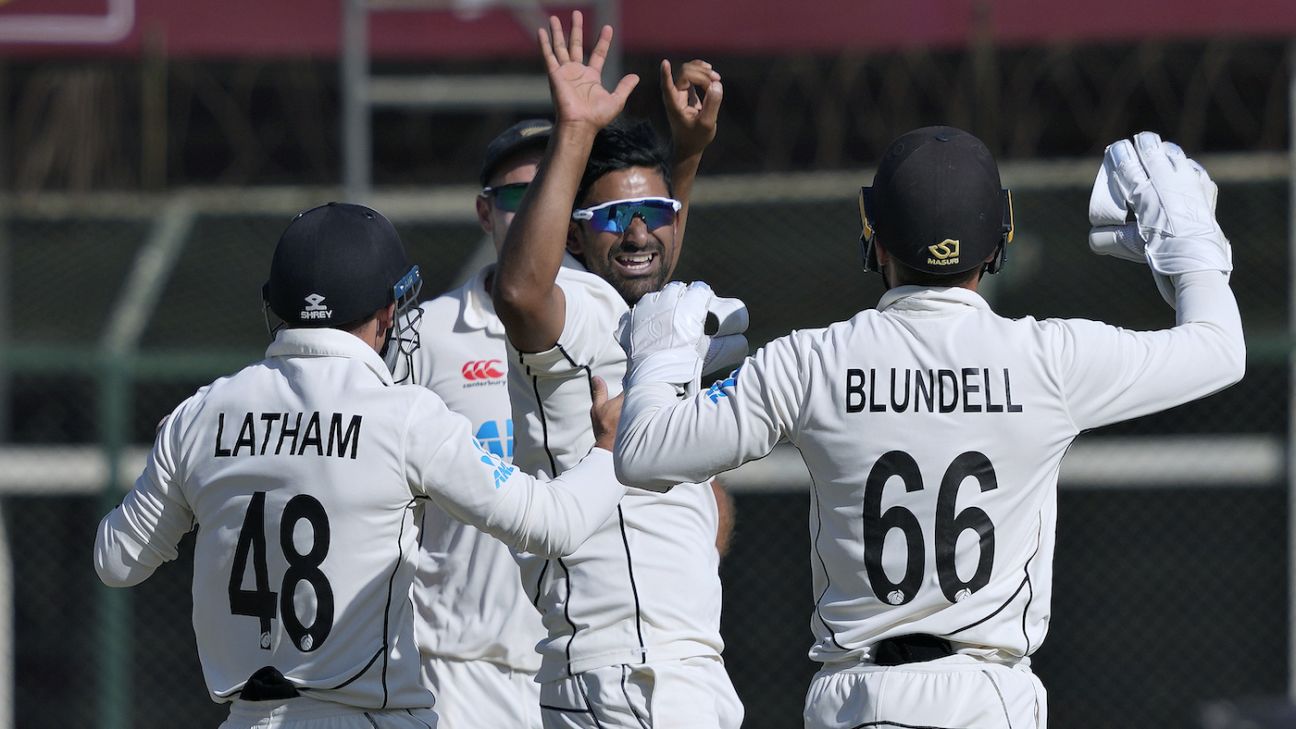 Imam-ul-Haq and Sarfaraz Ahmed took Pakistan into the lead with their unbroken 81-run partnership for the fifth wicket on the final morning of the first Test in Karachi. At one stage, the hosts were 100 for 4, still 74 in arrears, but Imam and Sarfaraz revived the innings and steered them to 181 for 4 by lunch.
Earlier, Tim Southee created a chance in the second over of the day when Imam drove at a full ball and got an outside edge. But there was no slip in place, and the resulting boundary took Imam to his half-century. But it didn’t take long for New Zealand to strike. In the next over, Michael Bracewell dismissed nightwatcher Nauman Ali lbw.
Babar Azam walked in at No. 5 and, after defending the first few deliveries, took full advantage when Bracewell erred on the shorter side. Babar rocked back and pulled the offspinner to the square-leg boundary twice in a 12-run over. That prompted Southee to bring on Ish Sodhi, and the legspinner struck with his very first ball this morning, trapping Babar lbw with a googly. The Pakistan captain opted to review but it proved futile.

Coming ahead of Saud Shakeel, Sarfaraz took the attacking route. After picking up two back-to-back fours off Southee, he hit three boundaries in Ajaz Patel’s first over of the day. The first two came via the sweep shot, and when Ajaz switched to over the wicket, Sarfaraz jumped towards the leg side and cut him through covers to move to 25 off 15 balls.

But after that, Ajaz started bowling well outside leg, and Sarfaraz looked happy to pad him away, apart from an occasional reverse sweep.

Sodhi, though, was getting turn from the rough outside the left-hand batter’s off stump. Imam tackled that by coming down the track and mostly smothering the turn. There was an occasion when he tried to go hard at it and got an inside edge, but luckily for him, the ball missed the leg stump.

With the partnership having crossed 50, Neil Wagner was introduced into the attack for the first time in the 57th over of the innings. He started around the wicket, and even had Tom Blundell standing up to the stumps for an over, but Imam and Sarfaraz saw him out to take the side to lunch.