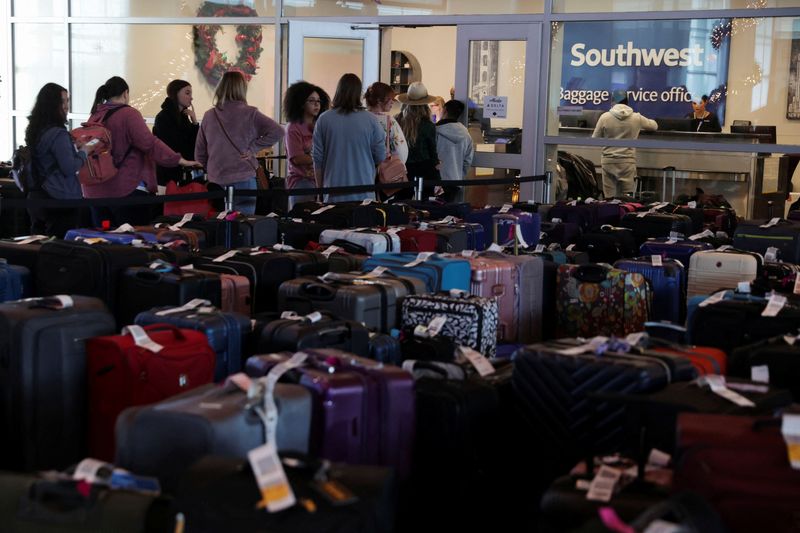 © Reuters. Southwest Airlines passengers wait in line at the baggage services office after U.S. airlines, led by Southwest, canceled thousands of flights due to a massive winter storm which swept over much of the country before and during the Christmas holiday weeke

A massive winter storm that swept over the United States before the Christmas holiday weekend forced U.S. airlines to cancel thousands of flights, but Southwest’s problems deepened while other airlines have largely recovered.

On Thursday morning, the airline had 2,357 canceled flights, or 58%, far more than other carriers, according to airline data tracker FlightAware. Total cancellations within, into or out of the United States on Thursday totaled 2,451, it said.

Flight attendants have been complaining about technological failures at the airline for years, according to Lyn Montgomery, president of the Southwest Airlines Flight Attendants Union.

The union leadership has raised the issue repeatedly, including in contract negotiations since 2018, she said. On a Sept. 27 picket line, she added, one sign read, “Picket line loading, Southwest Airlines technology failure.”

“There’s many ways it could have been avoided,” Montgomery said on Thursday on CNN, including commitments by Southwest executives to ensure that IT infrastructure would be able to meet the companies’ growth.

The comments echoed those of the Southwest Airlines Pilots Association, which blamed leadership failures in adapting airline operations to address repeated systems failures despite years of calls for improvements by the union.

“The holiday meltdown has been blamed on weather that had been forecast five days prior, but this problem began many years ago, when the complexity of our network outgrew its ability to withstand meteorological and technological disruptions,” it said in a statement on Wednesday.

Company officials acknowledged that current problems stem, in part, from an inability of internal logistics and scheduling systems to recover after widespread storm disruptions.

Top executives apologized to customers this week and promised to address the issues that led to the disruptions.

Ryan Green, chief commercial officer at Southwest Airlines, in a statement said that “all the flexibility and planning that we put in place to deal with the storm just wasn’t enough.”

He said the company has extended flexibility for self-service travel changes through Jan. 2.

Southwest CEO Bob Jordan said the company needs to “double down on our already existing plans to upgrade systems for these extreme circumstances so that we never again face what’s happening right now.”

U.S. Transportation Secretary Pete Buttigieg said on Wednesday that the high number of cancellations indicated a system failure at Southwest.

“We are past the point where they could say this is a weather-driven issue,” he told ABC News.