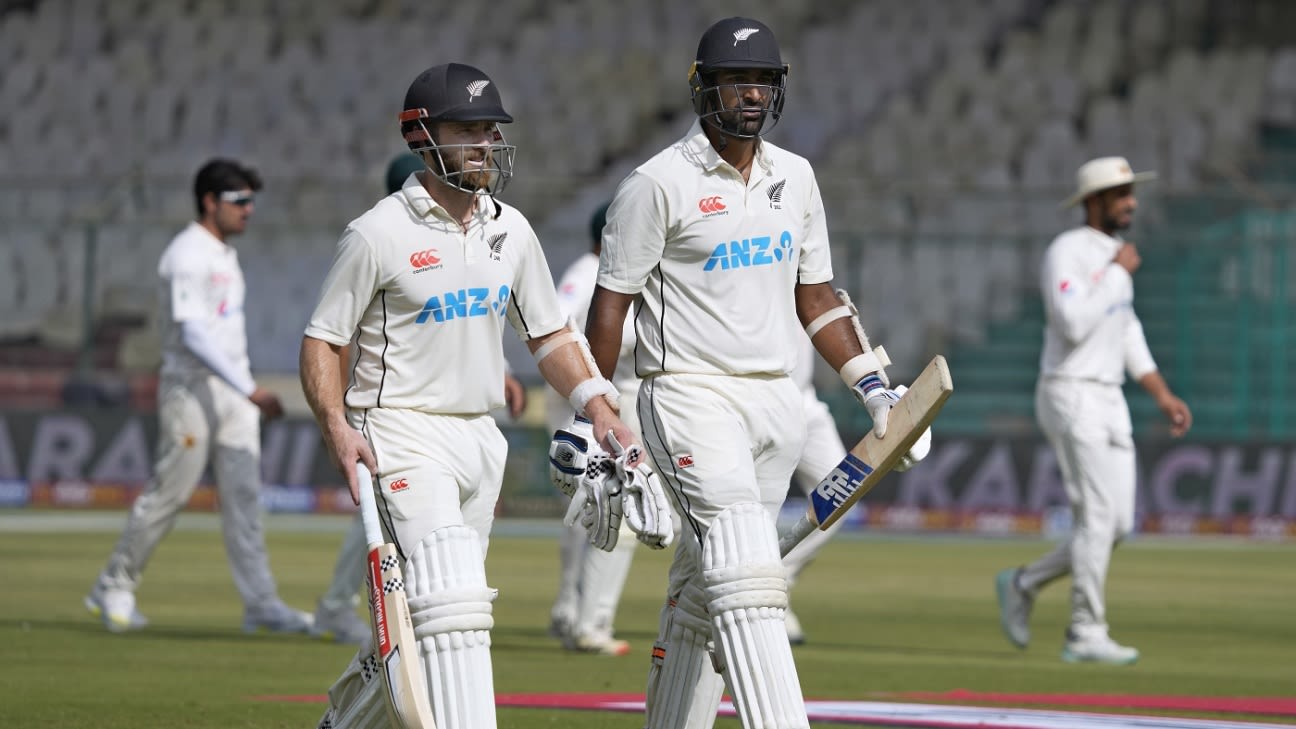 In a session that had the laziness of a winter morning, New Zealand’s overnight batters Kane Williamson and Ish Sodhi added 79 runs in 32 overs to extend their lead to 81 by lunch on day four. Their unbroken seventh-wicket partnership is now worth 83, which includes five penalty runs via the ball hitting the helmet placed behind the wicketkeeper. Interestingly, Sodhi’s contribution (41) to the stand is more than that of Williamson (35).
At the start of the day, though, Sodhi was primarily focused on protecting his wicket; he looked to score only when the bowlers really erred in their lines and lengths. Mohammad Wasim pitched one short and wide, and Sodhi cut it through point for four. When spinners dropped it short and strayed down the leg side, he went for the pull, but on a sluggish pitch, the timing eluded him.

Wasim played around with his field. At one point, he had a leg gully, a catching backward square leg, and two catching short midwickets for Sodhi. He went slightly round-arm, searching for the reverse-swinging yorker, but couldn’t get his length right, and Sodhi faced little trouble blocking those. One such delivery found Sodhi’s inside edge and thudded into his pads. Aleem Dar ignored the stifled appeal for lbw, but Babar Azam, more in hope than anything else, ended up burning Pakistan’s final review.

From the other end, Abrar Ahmed mixed his legbreaks with googlies. He varied his pace as well, looping it as slow as 70kph to darting as fast as 90. But nothing bothered Williamson and Sodhi.

Williamson was sedate in the first 11 overs of the day, scoring just six runs off 29 balls before skipping down the ground to Abrar and punching him over his head for four. Later, around 30 minutes before the interval, he attempted a couple of reverse sweeps against Nauman Ali.

With little happening for the bowlers, Pakistan took the third new ball as soon as it became available. Mir Hamza produced a chance immediately, inducing an outside edge of Sodhi’s bat, but it flew for four through the vacant second-slip region. The one that carried to Sarfaraz Ahmed shortly afterwards, off the same bowler, no one seemed to notice. That was the second life for Sodhi – Sarfaraz had earlier dropped him down the leg side off Nauman.

With things moving almost on autopilot, New Zealand took their total past 500. At the moment, it looks they are happy to bat Pakistan out of the match.