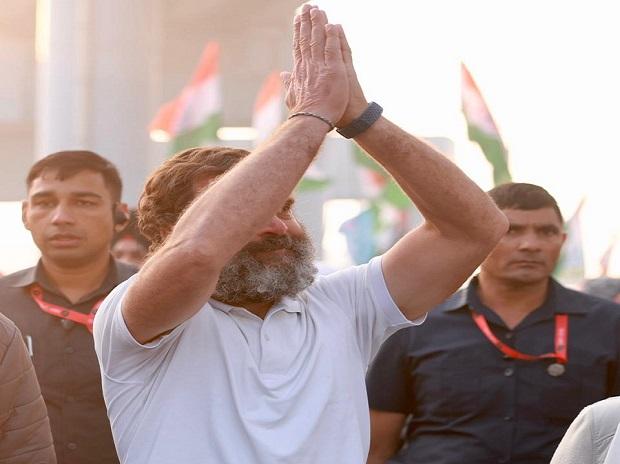 Former Congress chief Rahul Gandhi who has found his been the subject of scrutiny for choosing to don a T-shirt even during the ongoing cold wave in North India, was once again spotted wearing a tee shirt at the party’s 138th Foundation Day celebrations in the national capital.


Former party chief Sonia Gandhi was also among those who participated in the Congress party’s Foundation Day celebrations at the All India Congress Committee headquarters here.


“T-shirt hi chal rahi hai aur jab tak chal rahi hai chalayenge…” (Will wear it as long as I can), Rahul was head responding to a question by a reporter at the venue.


The former Congress chief was on Monday seen similarly dressed in a T-shirt as he visited the memorials of Mahatma Gandhi and several former prime ministers to pay his tributes.


The BJP’s IT head Amit Malviya took to Twitter today to share a video of the conversation and took a jibe at the Congress leader.


Earlier on Monday, Congress leader Salman Khurshid said, “Rahul Gandhi is superhuman. While we are freezing in the cold and wearing jackets, he is going out in T-Shirts (for his Bharat Jodo Yatra). He is like a yogi doing his ‘tapasya’ with focus.”


Bharatiya Janata Party (BJP) General Secretary Dushyant Gautam took a potshot at Khurshid’s statement and said,” Rahul Gandhi should tell which prasad he consumes, due to which he does not feel cold. He should also give the same prasad to his sena so that they too do not have to wear clothes in the cold.”


Meanwhile, earlier today, Rahul Gandhi took to Twitter to post in Hindi, “I am proud, I am a part of such an organization which chose the path of truth, non-violence and struggle in every situation and always took every step in the public interest.”


Speaking at today’s function at the AICC headquarters, Congress President Mallikarjun Kharge, who was elected to the post of party president in September hit out at the government. “The basic principles of India are under constant attack. A pit of hatred is being dug all over the country. People are in trouble due to inflation, unemployment but government does not care,” he said.


The Indian National Congress was founded on December 28, 1885, in Bombay (Mumbai) in the presence of 72 delegates at Das Tejpal Sanskrit College.


Its founder General Secretary was AO Hume and Vyomesh Chandra Banerjee was made the President.