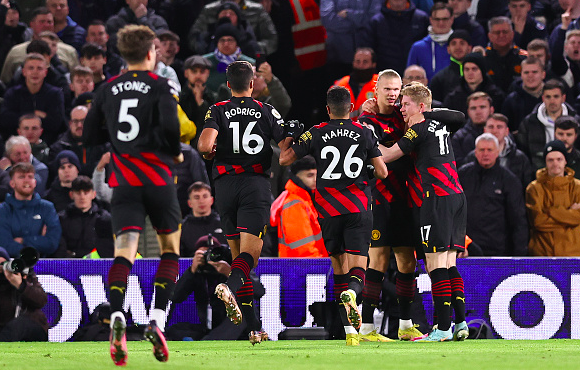 Simply looking to make up some ground in the title chase, Manchester City marked their return to Premier League duties with a 3-1 victory away at Leeds on Wednesday night.

Leapfrogging Newcastle and cutting Arsenal’s lead at the top of the table to five points, Pep Guardiola’s side were a more than worthy winner here as goals from Rodri and an Erling Haaland brace claimed an eye-catching win.

While Pascal Struijk could have set up a grandstand finish as his header in the 73rd-minute grabbed Wednesday’s hosts a consolation strike, the relegation scrappers simply couldn’t stop the defending champions.

Although Leeds might have managed to keep up the Premier League giants until first-half stoppage time, it will be City’s attacking record-breaker who stole most of the headlines at Elland Road.

Two sides who find themselves battling it out at opposite ends of the Premier League table, we have taken a look at the key talking points following Wednesday’s showdown in Yorkshire.

Guardiola gets the performance he was demanding

Marking their return from the World Cup break last week as they claimed a thrilling 3-2 victory against Liverpool while on EFL Cup duties, Guardiola was demanding a similar display from his side here.

Heading into the festive interval with a stunning last-gasp 2-1 defeat at home against Brentford on November 12th, the former Barcelona boss knows that his side can not afford many more slip-ups.

Watching Arsenal eventually breeze their way to a 3-1 romp at home against West Ham on Boxing Day, the Sky Blues were simply looking to avoid a potential banana skin away from the Etihad on Wednesday night.

With many still believing that Guardiola’s superstars are still a leading contender to defend their crown in 2023, City have also continued to gain a reputation for their success on the road.

More than deserving of their 3-1 victory here, City have now lost just one of their previous 25 Premier League appearances away from the Etihad – a run that stems all the way back to August 15th.

Given the whole World Cup break off as Norway failed to book their Qatar winter ticket, Premier League defenders up and down the country will be fearing what Haaland has in store for 2023.

Finding the net in City’s 3-2 EFL Cup victory against Liverpool last week, the former Borussia Dortmund striker has simply carried on from where he left off prior to the winter interval.

Eventually leaving Elland Road with yet another brace on Wednesday night and already with one hand on this season’s Golden Boot, Haaland has only continued to break records by the week.

Continuing to underline his status as Europe’s most lethal marksman, the 22-year-old has already racked up 25 strikes since arriving in Manchester and finds his stock at an all-time high.

In fact, while Haaland might have felt that he should have left Yorkshire with another hat-trick to his name here, the 23-cap international wrote another chapter in the Premier League’s record books.

Despite making just 14 Premier League appearances this year, Haaland became the fastest player to reach 20 top-flight goals in a season.

Leeds are bracing themselves for another relegation scrap

Heading into the World Cup’s winter break with an action-packed 4-3 loss away at Tottenham on November 12th, Leeds would have known that they faced a monumental challenge here.

While Jesse Marsch’s side might have put in a largely rugged display until Rodri opened the scoring in first-half stoppage time, the former RB Leipzig boss saw his side struggle to find a similar level after the interval.

Although the Whites might have managed to find a much-needed boost when opening November, Wednesday’s hosts appear destined for another relegation scrap in the New Year.

While the Yorkshire-based outfit might have just about clung to their top-flight status last season, Leeds head into the weekend’s fixtures holding just a two-point buffer from slipping into the bottom-three.

Now mustering just a pair of Premier League victories from their last 12 attempts – a run that stems all the way back to August 21st – there could be some growing pressure on Marsch’s shoulders in 2023.