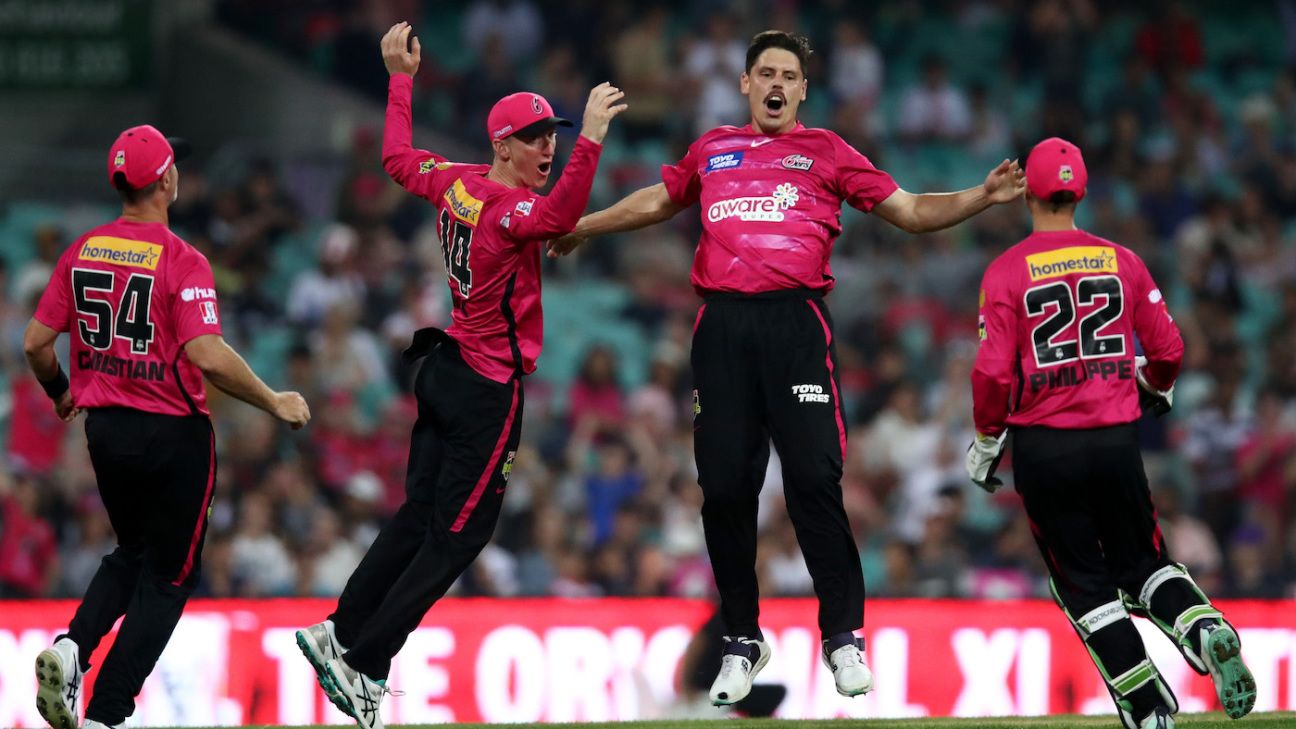 Quick Ben Dwarshuis made a superb return to thwart Melbourne Renegades’ experienced batters and lead Sydney Sixers to a 34-run victory at their favoured SCG.

With Sixers defending a modest 150, left-armer Dwarshuis claimed four key wickets on a surface playing tricks as the match wore on.

A star-studded Renegades batting line-up nosedived as they slipped to their second straight defeat after a bright start to the season. Powerhouse Sixers have found form since returning home and notched their third straight victory.

Hostile Dwarshuis sinks Renegades
Without injured spinner Steve O’Keefe, Moises Henriques decided to open the bowling with Dwarshuis, who returned for his first game since Sixers’ season-opener against Adelaide Strikers.

It proved a wise choice as he removed Martin Guptill in the opening over and set the tone. His sharpest delivery was the one that smashed Aaron Finch on the hand as Dwarshuis conjured menacing bounce.

He picked up Jonathan Wells in the 13th over to boast the extraordinary figures of 2 for 3 from three overs. But he wasn’t done. Dwarshuis was handed the ball when Renegades took the power surge in the 17th over. After being hit for a huge six from Will Sutherland, which slightly tarnished his almost flawless figures, Dwarshuis gained revenge on the next ball and then capped his stellar performance with the wicket of Peter Handscomb.

Having made his T20I debut in Pakistan earlier in the year, Dwarshuis issued a reminder of his talents to finish with 4 for 17 from 4 overs marked by 19 dot balls.

Renegades’ returning stars struggle
Renegades brought in a wealth of experience with the inclusion of Guptill, Handscomb and Shaun Marsh. Having played just one BBL match a decade ago, Guptill lasted only four deliveries while Marsh struggled early in his return from nagging calf issues.

In his first match since captaining Western Australia to last season’s Sheffield Shield title, Marsh was rusty as he made just three runs off 10 deliveries before launching several trademark blows.

He formed a blossoming partnership with Finch, worth 55 runs, as Renegades moved into the box seat at the halfway mark. But Marsh was bowled by seamer Hayden Kerr for 28 and Renegades fell away from there.

Philippe finally fires
There was a lot of excitement over the pairing of Kurtis Patterson and Josh Philippe at the top of the order for Sixers. Patterson was the highest run-scorer for champions Perth Scorchers last season before deciding to return home.

But the partnership has yet to deliver. They got through the powerplay before Patterson’s frustrating season continued when he fell for 17 in the fifth over. It was his third straight start but his highest score remains only 38.

Philippe, a standout batter in recent seasons, had also performed modestly but was determined for a big score. After a sedate start, he wound back the clock with an assault on spin in the sixth and seventh overs.

Philippe slog-swept two sixes off Mujeeeb Ur Rahman before surviving a dropped catch from Wells. It appeared to be the opener’s night as he powered to his first half-century of the season and just the second overall in the competition by a Sixers batter.

But he miscued a scoop shot to fall on the last ball of the 12th over with Sixers poised to take the power surge. Philippe trudged off knowing he missed a golden opportunity for a big score.

Sutherland shines with the ball
With Renegades’ main bowlers doing the job, allrounder Sutherland has been barely required. The 23-year-old quick bowled only five overs in four matches, but made his mark when needed against Sixers under pressure.

Renegades were staring down the barrel until Sutherland dismissed Philippe and James Vince to change the momentum. He bowled canny slower deliveries, including a pearler to dismiss Vince, to underline his variety.

Before the BBL season, Sutherland turned heads having taken 15 wickets from his last two Sheffield Shield matches. He’s probably not in the frame to replace injured Australia allrounder Cameron Green for the third Test against South Africa at the SCG, but don’t be surprised if he’s bandied around. His fine bowling effort was most certainly well-timed.

Tristan Lavalette is a journalist based in Perth