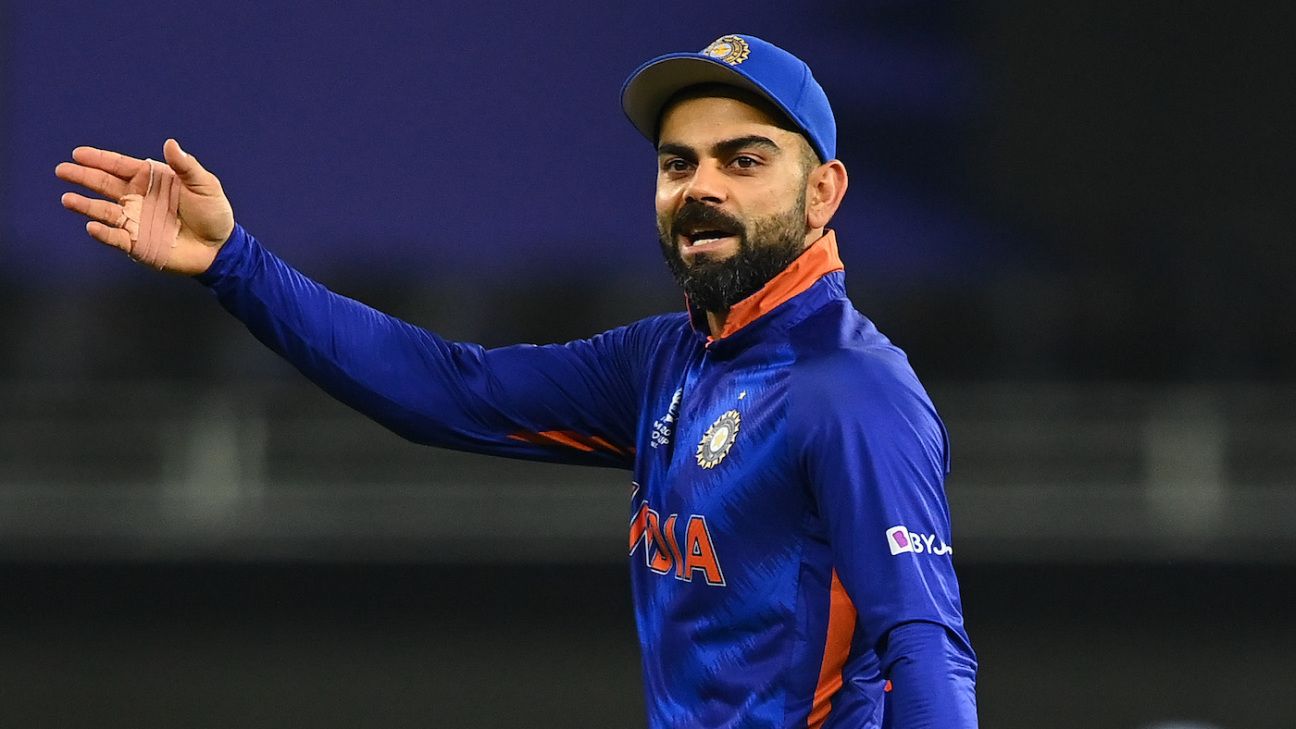 Two matches into their T20 World Cup campaign, India are winless and on the brink of elimination. On Sunday, India only managed to post 110 in their 20 overs – a total that New Zealand breezed past with 5.3 overs to spare – and Virat Kohli, their captain, put it down to his team not being “brave enough” during the game. This, he explained, was characterised by their batters getting caught in two minds while looking to take risks.

“Quite bizarre. To be very honest and brutal up front, I don’t think we were brave enough with bat or ball,” Kohli told the host broadcaster during the post-match presentation. “With the ball, I mean, obviously we didn’t have much to play with, but we were just not brave enough with our body language when we entered the field, and New Zealand had better intensity, better body language, and they created pressure on us from the first over onwards, really, and continued that through the innings.

“Every time we felt like we want to take a chance [while batting], we lost a wicket. That happens in T20 cricket, but that’s most probably or most often the result of that little bit of hesitation with the bat, when you feel like should you go for the shot or not.”

Playing for India in a global tournament always comes with the pressure of expectations from the biggest fanbase in the sport in the world, and Kohli suggested India hadn’t managed to overcome that pressure in their two games so far, against Pakistan and New Zealand.

“When you play for the Indian cricket team, you obviously have a lot of expectations, everyone knows that – not only from the fans but from the players themselves,” he said. “Wherever we play, we are watched, people come to the stadiums to support us, so there’s always going to be more with our games, that’s always been the case, and we’ve embraced it over the years, and everyone who plays for the Indian team obviously has to embrace that as well, and learn how to cope with it.

“And when you cope with that as a team, you tend to overcome that pressure and those tough situations. And we haven’t, in these two games, and that’s why we haven’t won.”

India are now in the awkward position of being all but out of the tournament, but still having to play three more matches in their group. Kohli said India would have to ensure they remained in a positive frame of mind through these three games.

“There’s only one way to play T20 cricket – you have to be optimistic, you have to be positive, take calculated risks, and that’s what this format is all about,” he said. “Just because you’re the Indian cricket team and there’s expectations, doesn’t mean that you start playing the format differently.

“So I think you have to disconnect from that a little bit and just back ourselves out there and take pride in performing for the team. As long as individuals are looking to do that, I think we’ll be fine. There’s a lot of cricket to play in this tournament, something that we all must look forward to, and certainly the team must look forward to, and go out with a positive frame of mind.”