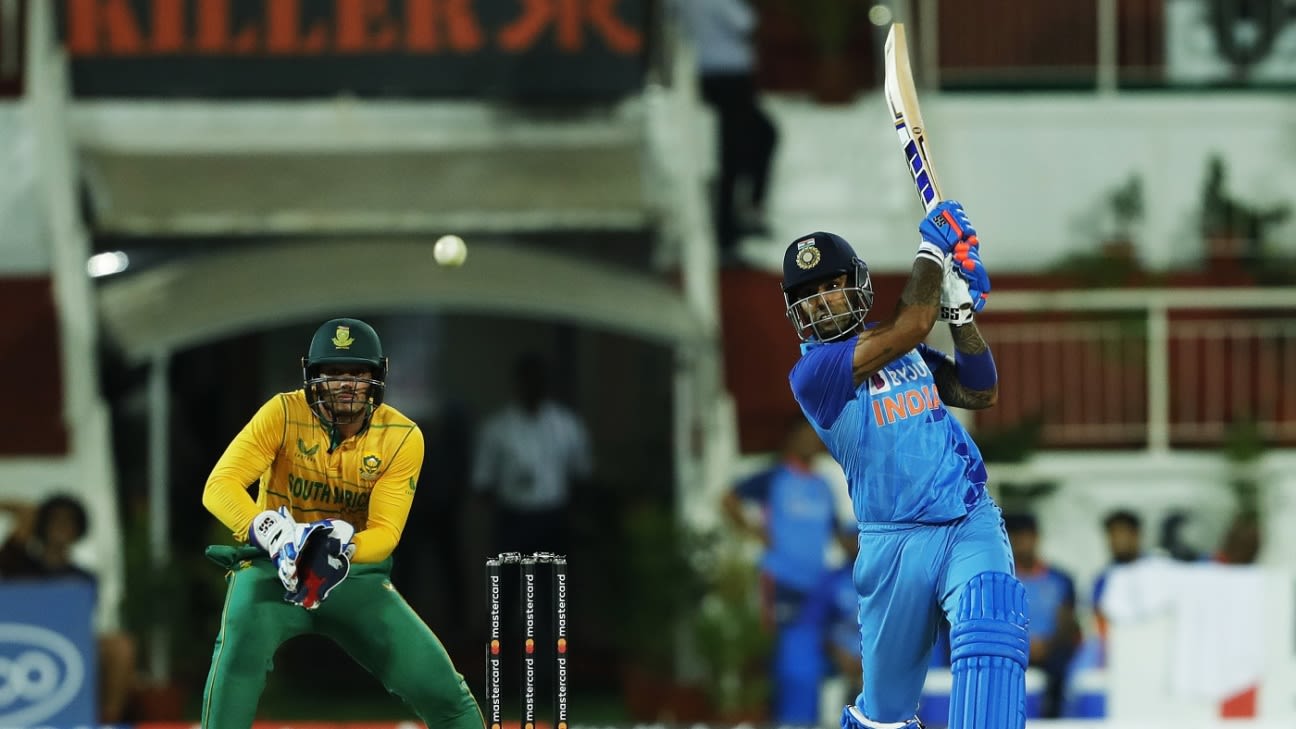 International cricket’s much-awaited return to Thiruvananthapuram, after three years, was celebrated with a clinic of pace bowling where, at the end of it all, India got the better of South Africa by eight wickets in the series opener.

Even though contrasting half-centuries from KL Rahul (51*) and Suryakumar Yadav (50*) shepherded the small chase, India’s win was set up by the new-ball assault from Arshdeep Singh (3 for 32) and Deepak Chahar (2 for 24). They had South Africa on the mat early, reducing the visitors to 9 for 5 inside the third over, with a supreme display of swing bowling in both directions.

For a brief period, even a target of 107 looked tricky for India with Kagiso Rabada (1 for 16) getting extra bounce, Wayne Parnell bowling stump-to-stump (0 for 14) and Anrich Nortje (1 for 32) bringing in red-hot pace. However, India always remained favorites, despite making only 17 runs in their first six overs; the 93-run unbeaten partnership between Rahul and Suryakumar took them home with 20 deliveries to spare and gave the hosts a 1-0 lead in the three-match series.

A procession of ducks
The Greenfield International Stadium was expected to be full of runs. However, very few seamers control the swinging ball like Chahar and Arshdeep do.

Chahar teased Temba Bavuma in the first over with two slips and three outswingers first up, but the last ball of the opening over was an inswinger that cut Bavuma in half and rattled the stumps.

From the other end, Arshdeep had Quinton de Kock inside-edge a cut onto his stumps off a wide-ish length ball. Within the next four balls, Arshdeep had both Rilee Rossouw and David Miller accounted for with first-ball ducks, getting the former with an outswinger that took the outside edge off a drive and removing the latter with an inswinger that flattened the poles.

Three balls later, Chahar had a third golden duck added to South Africa’s top order when Tristan Stubbs’ cut took a thick outside edge that flew to a diving Arshdeep at deep third. At 9 for 5, the South African lower order had a steep mountain to climb.

Maharaj and co. pick up the pieces
Arshdeep and Chahar were given a third over each in the powerplay, but with the swing drying up, Aiden Markram and Parnell began a mini recovery. But, the odd boundary or six aside, they were kept in check by the pacers. Chahar relied on a shorter length – with the ball getting old – but Arshdeep kept finding his full ball to Markram whizzing past the outside edge.

R Ashwin, introduced right after the powerplay after being picked ahead of Yuzvendra Chahal, had the liberty to show off his skills. He gave Parnell a mix of sliders and slow offbreaks in an economical spell of 4-1-8-0, while Markram – and later Keshav Maharaj – were offered the drifter and the carrom ball to keep them quiet. In all, he bowled 16 dots.

Axar Patel, who was introduced as the fifth bowler after 12 overs, bowled 15 dots of his own, delivering four overs on the trot. His line was closer to the stumps, and relied on ensuring the lower-order batters could not free their arms. When he did offer Parnell a bit of a slog, the batter could only find the fielder at deep midwicket.

However, Parnell’s 24 and Maharaj’s 35-ball 41 helped South Africa get into triple figures. Maharaj crunched Chahar in the 13th for a pulled six, and then got on top of Arshdeep in a 17-run over. Harshal, though, picked off Maharaj in a tidy 20th over to ensure India would be chasing at a run-rate of well under six.

SA seamers keep India honest
The chase was meant to be straightforward, and with a small target, Rahul had the liberty of playing out Rabada’s first over for a maiden. Rabada, though, attacked the stumps in his second over, and induced an edge off Rohit Sharma’s bat by getting the ball to come in and forcing the India captain to play at it. Virat Kohli came out intending to attack Rabada, but after a miscued drive early on, he too reined his shot-making. From the other end, Parnell looked less dangerous, straying down the leg side in a search for swing. However, he did give Rahul a scare on two occasions inside the powerplay that tempted South Africa enough to take two unsuccessful lbw reviews.

With wickets key for any chance of a South Africa win, Rabada bowled a third over inside the powerplay, and continued to trouble Rahul with his assortment of deliveries that jagged in and angled away. His three-over first spell for only six runs went a long way in India reaching only 17 for 1 after six overs, their lowest powerplay score ever in T20Is. Nortje came on just after the six-over mark, and his first delivery had Kohli looking to cut. But the extra bounce, and pace, got a thick edge, and de Kock was in action again. That brought Suryakumar in at No. 4.

Suryakumar attacks, Rahul gives support
As it has been customary with the newly-minted No. 2 batter in T20Is, Suryakumar decided to be aggressive from the start. After being hit on the body by Nortje’s first ball, he played the flick off his next two balls to score 12. The first six was fortuitous, with Nortje’s pace taking it for a six over deep third. The second one was more like Suryakumar, going into the stands beyond deep midwicket.

The introduction of the two spinners Tabraiz Shamsi and Maharaj meant smoother batting for the duo, especially Rahul. They milked the strike till the 10th over, ensuring the required run-rate did not go over 6.50 even if the team’s scoring rate, in itself, wasn’t remarkable.

After drinks, Rahul smacked the occasionally wayward Nortje for six over long on, to move to 21 in 37 balls, and after that, he never looked out of sorts again. Both batters hit Shamsi and Maharaj for a six each – Rahul with a pull, Suryakumar with a shot over long off respectively – after which they thumped Nortje for 11 runs in the 15th over.

Rabada, perhaps kept back a tad too late to bowl his final over, was hit by Suryakumar for consecutive fours with the game nearly sealed. Suryakumar, who finished with a strike-rate of 151.51, reached his fifty with only three runs to get. Rahul reached his half-century with a sweeping six off Shamsi to finish on 51 in 56 balls. They also happened to be India’s winning runs.