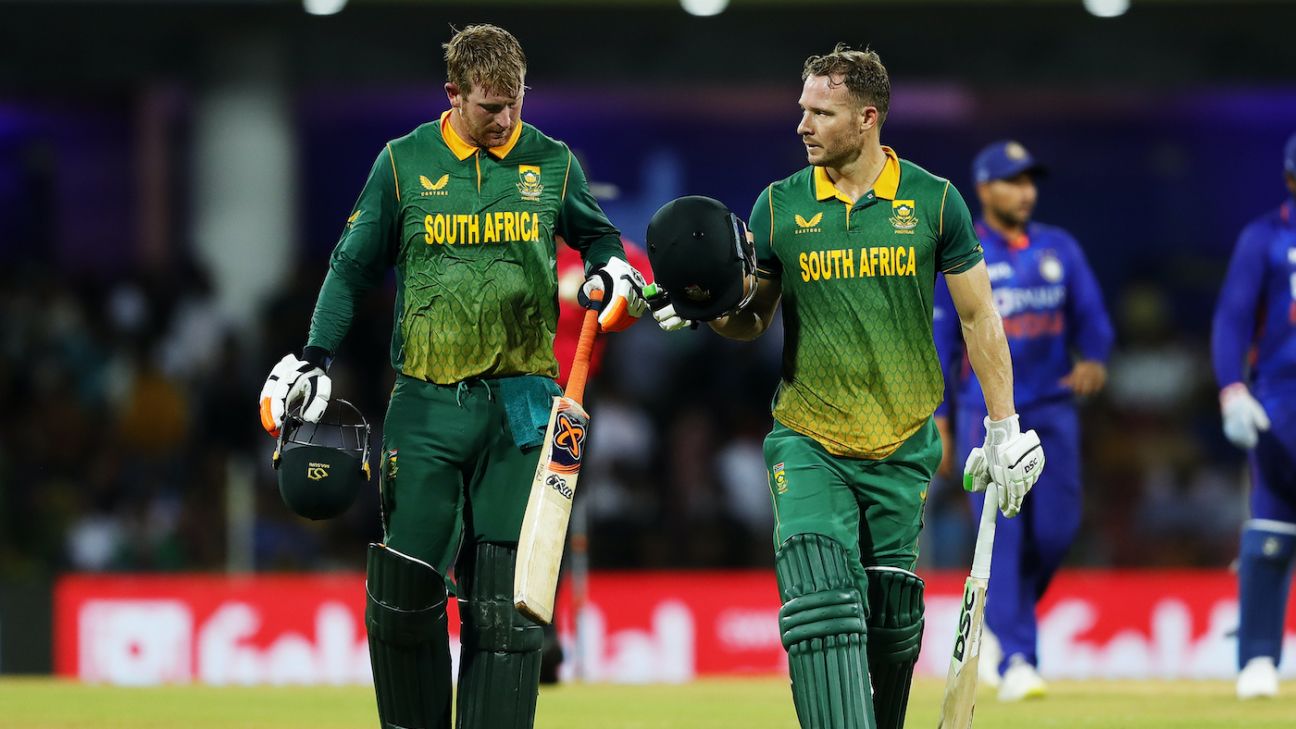 Sanju Samson smashed 86 not out off 63 balls but India fell just short of what seemed an improbable chase at one stage against a South African side desperate for wins in the World Cup Super League. The visitors escaped with ten points after being set up by an unbroken fifth-wicket partnership of 139 off 106 balls between Heinrich Klaasen and David Miller, who helped set India a target of 250, and a strong bowling effort early on that reduced India to 51 for 4 in 18 overs.
What should have a been a straightforward result in favour of South Africa was turned on its head by Shreyas Iyer and Samson, who put on 67 for the fifth wicket, and then Samson and Shardul Thakur. They added 93 in 66 balls for the sixth wicket and were particularly severe on South Africa’s second spinner, Tabraiz Shamsi. He conceded 89 runs in eight overs, including 20 in the final over, when India needed 30.

In the end, both teams were left to consider the limitation of using only five bowlers in an ODI innings. India only picked five while South Africa chose not to use part-timer Aiden Markram, and both attacks had mixed results. Their opening pairs were exceptional – Mohammed Siraj and Avesh Khan gave away only 28 runs in the eight-over powerplay, and Rabada and Parnell reduced India to 8 for 2 in 31 balls upfront – but one each of their spinners proved costly. Ravi Bishnoi, on debut, conceded 69 runs in eight overs while Shamsi’s economy rate was a massive 11.12.

In a match that was reduced to 40 overs a side, South Africa took time to set the pace of their innings in challenging conditions. Siraj and Avesh sent down four testing overs each, in which they found movement and challenged the openers’ awareness of their off stumps, but could not separate them. Instead, it was Thakur, brought on as first change, who issued the first threat. He drew Janneman Malan forward to take the edge but Shubman Gill, at first slip, put down the chance. India would go on to drop three more catches. Thakur got Malan two overs later, when the batter clipped a full ball to Iyer at midwicket and the opening stand ended on 49.

That brought under-fire captain Temba Bavuma to the crease and he almost fell for a third duck in four innings when he bottom-edged Thakur onto his foot and came close to chopping on. Bavuma went on to strike two sweet boundaries but was then bowled by a cross-seamer from Thakur for 8.

Sensing an opportunity to get into South Africa’s middle order, Shikhar Dhawan brought on Kuldeep Yadav to replace Bishnoi and it was clear that Aiden Markram could not read him at all. Markram was foxed by the googly and the shorter delivery and then bowled by the legbreak as he moved forward to defend. South Africa were 71 for 3 after 16 overs.

Klaasen and de Kock led the recovery with a fourth-wicket partnership of 39. The two were going well until de Kock missed a reverse sweep off Bishnoi and was out lbw for 48. With 17.4 overs left and a decent platform laid, the stage was set for Miller to tee off. He smacked a short, wide delivery from Bishnoi upfront, then swept the first Kuldeep ball he faced for four more and brought out the heavy artillery when he tonked Bishnoi back over his head for six.

The aggressor’s role was swapped between Miller and Klaasen who settled on a middle ground between an all-out attack and saving themselves for the end. In the 36th over, Miller reached his fifty off 50 balls, and Klaasen got to his milestone off 52. Klaasen’s was his first 50-plus score in 10 innings since April 2021, while Miller’s milestone continued his golden run in 2022. Miller averages 61.75 from ten ODIs and 56.60 from 12 T20Is this year. The pair plundered 54 runs off the final five overs to give India a challenging target of 250.

India’s task was made to look even more daunting by the sixth over of the chase. Gill inside-edged a full delivery from Kagiso Rabada onto his stumps and Dhawan chopped one from Wayne Parnell onto his. Rabada looked as dangerous as ever as he maintained a length just short of a good and a line outside off, finishing his five-over opening spell with figures of 1 for 10.

Maharaj was brought on just after the powerplay and held his end well to keep Ruturaj Gaikwad and Ishan Kishan quiet. By the time Tabraiz Shamsi was called on, in the 16th over, Gaikwad’s patience had run out. He advanced down the track to hit Shamsi over the off side but was beaten by the turn and stumped. Maharaj also enjoyed some of the spoils when Kishan danced down to clip him over the leg side in the next over and handed Malan a simple catch at leg slip.

Sanju Samson and Shardul Thakur put up an attacking partnership•BCCI

India’s required rate had climbed to more than nine an over when Iyer decided to take matters into his own hands. He hit Shamsi back over his head for four, helped himself to three successive boundaries off his next over, and took on Lungi Ngidi’s pace to bring up India’s 100. Iyer’s fifty came off 33 balls and his partnership with Samson had South Africa worried. Ngidi, though, put out those fears. He dismissed Iyer for the fourth time in four ODIs against him, with a short ball that Iyer lobbed to Rabada at mid-on. But the danger was far from over.

Thakur joined the fun when he guided Ngidi fine and then hit a Shamsi long hop through square leg, prompting Bavuma to bring back Rabada and then Parnell. Parnell was too short in his last over and Samson hit him for two fours. He was replaced by Ngidi, who also offered a back-of-good-length ball for Samson to pull for six.

Still, with India needing 74 off the last five overs, South Africa were the favourites. Both Shamsi and Rabada’s seventh overs were hit for 14 each and but panic was setting in, Ngidi removed Thakur and Kuldeep off successive deliveries. Thakur didn’t get hold of a full ball while Kuldeep tried to loft Ngidi over extra cover but Bavuma took a good catch running backwards. Ngidi himself, though, dropped Avesh in Rabada’s final over, running in from point.

India needed 30 off the last over, which started with a wide. Samson then took 14 runs off the next three balls to leave 15 to get off three. He then tried to slog sweep Shamsi but couldn’t pierce the field and the match was all but over. South Africa would have had their hearts in their mouths until the end, when they sealed a tense win.

Having dropped points against Ireland, Sri Lanka and Bangladesh, and with three matches against Australia due to be forfeited, all of South Africa’s matches are effectively must-wins. They remain in 11th place on the standings but have closed the gap between themselves and Sri Lanka and could leapfrog them and Ireland into ninth place with another win in this series.