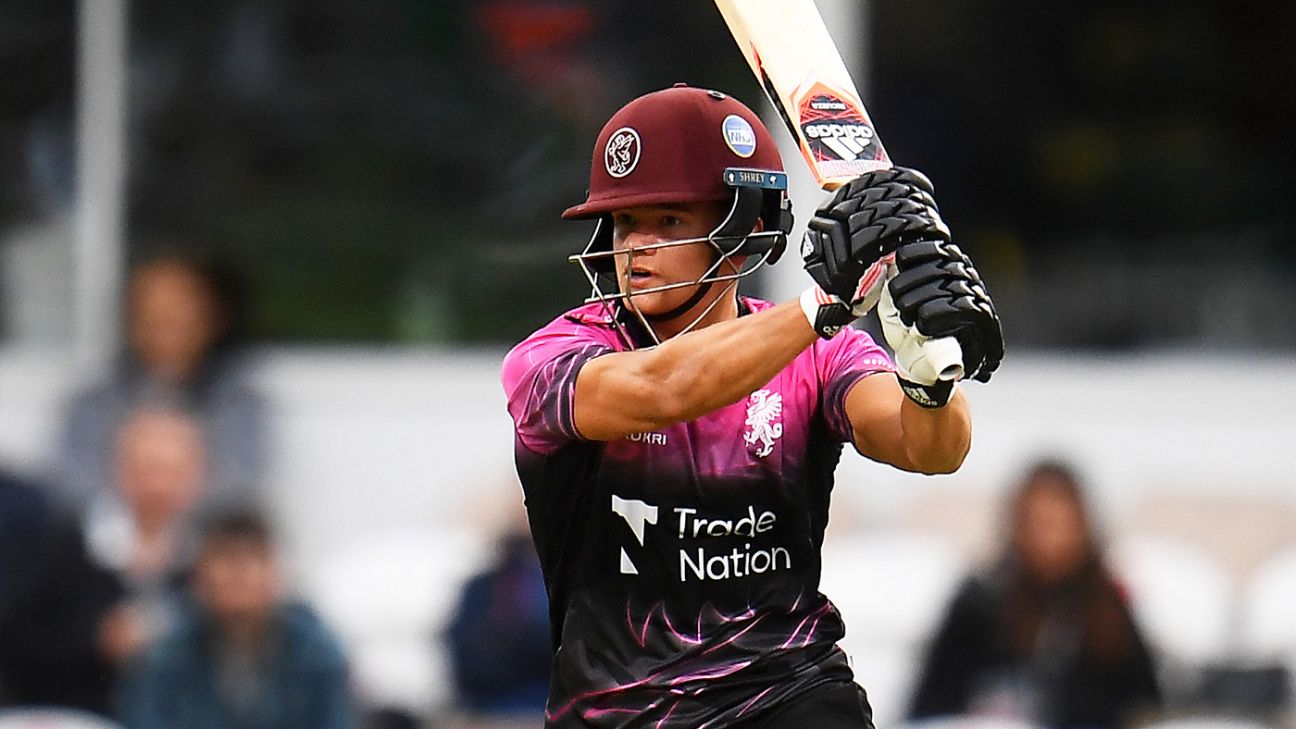 In early 2019, Somerset filmed short video clips of their academy players for their YouTube channel to introduce them to the club’s supporters.

They were each asked a series of quickfire questions: Childhood hero? If you could be one current cricketer, who would you be? Would you rather play in the Ashes, World Cup or IPL? Will Smeed, then 17, answered the last question with a self-aware, self-confident smirk as he gave the response that he knew would horrify many fans of English cricket: he went for the IPL.

It might be a difficult answer to understand – and one that shouldn’t be taken too seriously – but Smeed is part of a generation who have grown up with the tournament. From 2010-14, the IPL was the only top-level cricket available on free-to-air TV in the UK, regularly drawing in half-a-million viewers per afternoon on ITV4 despite the contempt with which it was viewed by English administrators.

Smeed was three years old when England won the 2005 Ashes on Channel 4: for most of his life, English cricket has been paywalled. The minority of young cricket fans with Sky subscriptions might have grown up on a diet of Alastair Cook, Ian Bell and Jonathan Trott, but it was Kieron Pollard, MS Dhoni and AB de Villiers who made a lasting impression on the rest.
Smeed has always been “an anomaly”, as he put it in a Daily Telegraph interview after signing a white-ball-only contract with Somerset on Monday. He played 55 professional T20 games before his 21st birthday and has made appearances in the Hundred, T20 Blast, Abu Dhabi T10 and PSL, but not the County Championship nor the Royal London Cup. His talent is abundantly clear: on 50-over debut this summer (in a game without List A status) he hit 90 off 56 balls against an attack which featured Anrich Nortje and Lungi Ngidi; in August he became the Hundred’s first centurion.
Smeed’s decision is groundbreaking. Other English players have quit first-class cricket in the past but the vast majority of them have done so late in their careers, not at the age of 21 and on the fringes of the England set-up. It is a move that young players across the country will have noted and discussed over the last 24 hours.
Highly regarded as he progressed through Somerset’s age-group teams, Smeed’s name first came to wider attention four years ago. Playing a Second XI Championship game at the age of 16, he put on 92 for the third wicket with a 42-year-old Marcus Trescothick; both made hundreds, and their stand made headlines.

It might prove to have been the highlight of his red-ball career. Smeed insists he has not retired from multi-day cricket but, barring some creative selection for England’s Test team, it is difficult to see a route back for him. Mo Bobat, England’s performance director, saw his decision coming; speaking on an episode of the Unofficial Partner podcast, recorded last month, he suggested that Smeed “could have a purely white-ball career”.

And why shouldn’t he? There is an assumption built into English cricket that Tests should always come first, but the sport has not been set up that way for those of us who have grown up in the 21st century. The genie has been out of the bottle since Smeed was a toddler.

In practice, Smeed’s decision may not change much: he has never played a first-class game and the depth of talent nurtured in Somerset’s academy means he finds himself a long way down the pecking order in their Championship team. His short-form dominance and long-form struggles have created the perfect storm for a unique decision.

If Smeed finds a suitor in next month’s IPL auction – and his deal with MI Emirates in the ILT20 hints that he might – then he would have missed the first two months of the season regardless; if he does not, he will have two months between the end of the PSL and the start of the Blast to rest and then train, rather than playing second-team cricket in “an empty field with the wind howling”, as he put it.

While money is clearly not his primary motivation – he has already earned huge sums from cricket while most of his friends are racking up debt from their student loans – his move makes financial sense, too. When English players without national contracts miss games to play in the IPL, they are obliged to pay a significant percentage of their salary back to their counties; as a white-ball specialist, Smeed will not have that issue if he gets a deal in 2023.

It might have been obscured by England’s Test team under Brendon McCullum, but the game’s formats are quickly diverging. An ODI series starts in Australia this week while the Test squad are training in Abu Dhabi; in February, the white-ball team will play warm-up games in Bangladesh during the second Test in New Zealand. Smeed put it simply: “I would much rather be a master of one trade than a jack of all.”

In his school days, Smeed was two years below Tom Banton – now his T20 opening partner – in the same King’s College Taunton boarding house. In 2019, it seemed as though Banton had the world at his feet: he was the Blast’s breakout star and scored five Championship fifties, juggling the formats admirably. Now, he is trying to reboot his career after three difficult seasons in which his red-ball struggles bled into his white-ball game.
Instead, Smeed has gone all-in: “I want to be the best player that I can be, and to do that I believe that this needs to be my focus,” he said. In the long term, there may be some concerns over his adaptability – as Ben Stokes showed in Sunday’s World Cup final, T20 is not only about power-hitting – but the dearth of 50-over cricket available to him due to the Hundred’s clash with the Royal London Cup is a bigger factor in that than the decision to put his red-ball ambitions on ice.

In due course, Smeed will become a superstar: his fearless hitting and raw power have already attracted him to franchises across the world and his decision this week marks him out as an outlier. But he is also part of a tranche of young players who have grown up with T20: do not be surprised if and when others follow his lead.