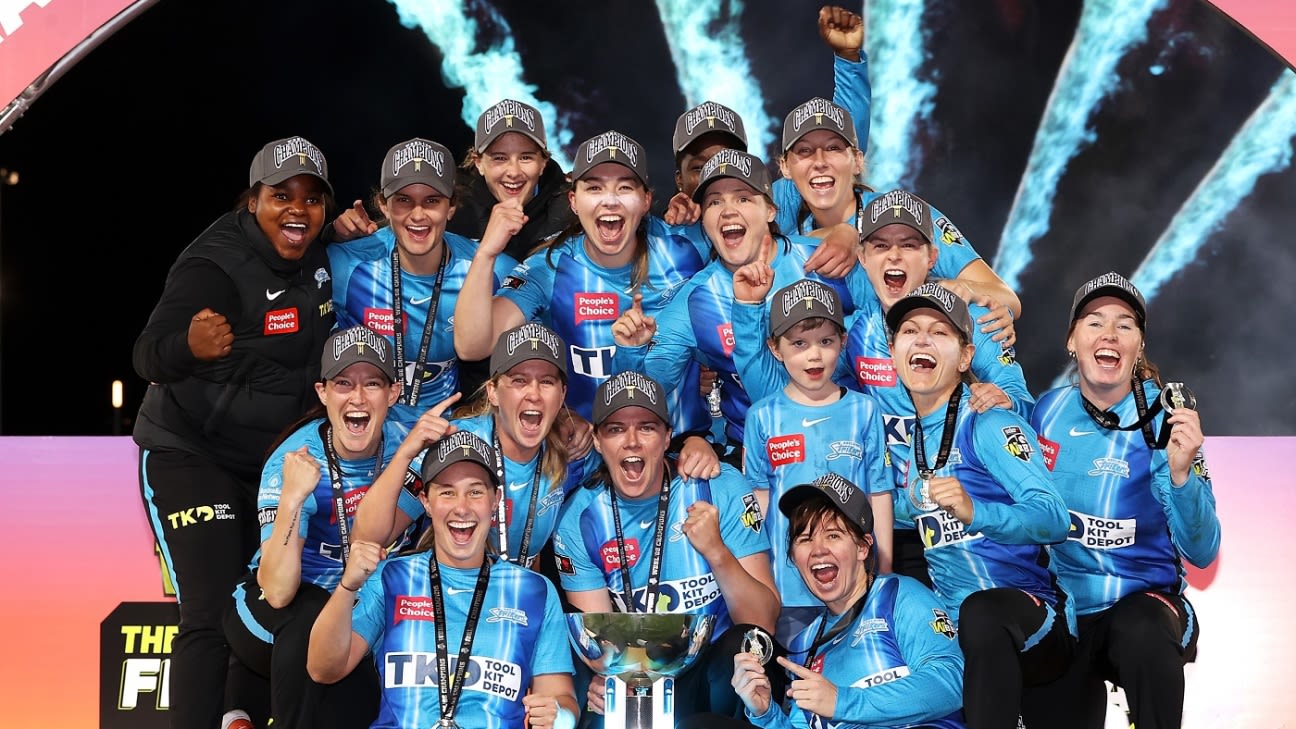 More home matches and playing at bigger stadiums are on the cards for the WBBL, as the rapidly expanding women’s game puts pressure on the tournament to retain its standing as the premier event.

The latest edition of the WBBL came to a conclusion in front of a crowd of 6478 at North Sydney Oval on Saturday as Adelaide Strikers claimed their first title by overcoming favourites Sydney Sixers who had secured a record 11 wins in the regular season.

After two seasons of Covid-19 disruptions, which included the Melbourne teams not playing at their home grounds for two years and the two Sydney sides being locked out last season, the tournament returned to all the states in this edition.

However, it was competing in a congested sporting calendar across October and November which included the men’s T20 World Cup, albeit a clash that won’t be repeated for some time, and also the AFL Women’s league, which had its grand final the day after the WBBL.

There is confidence that the tournament held up well alongside the various competitions and it continues to rate well on television, but the head of the Big Bash Leagues Alistair Dobson believes now that Covid has been navigated it’s time to be “bold and ambitious.”

That could mean a reduction of the festival weekends of fixtures which have seen teams play neutral games, and also the use of iconic stadiums such as the SCG and MCG for marquee matches such as local derbies and the finals. Last year’s Eliminator and Challenger were held at Adelaide Oval and the final at Perth Stadium, but such venues have not been used since the competition went standalone in 2019.

“The WBBL is definitely suited to the grounds we’ve played in, such as North Sydney Oval and Citipower [Junction Oval] in Melbourne, but equally the scale of the WBBL means that we need to be bold and ambitious enough to look at playing the bigger games in bigger stadiums,” Dobson told ESPNcricinfo. “While it wouldn’t be on a regular basis I’d love for us to be bold enough for us to start playing some of those games in bigger stadiums because that’s where it deserves to be.

“It’s also about the schedule and how we make sure we bring matches to each team’s home market on a regular basis. This year, for example, we didn’t have too many games in Melbourne until quite late, equally in Sydney, and that showed that once you start bringing matches into those markets the interest takes off.”

We are absolutely mindful of what the players are telling us, they are at the heart of the strength of the WBBL. Ultimately the WBBL’s goal is to be a visible pathway for women and girls in cricket so we need to make sure are delivering on that as well

There are also the wider developments taking place in the women’s game with more leagues and more international cricket on the calendar. This season’s WBBL saw a handful leading players, including India’s Harmanpreet Kaur and Smriti Mandhana, withdraw and next year there will likely be a Women’s PSL and Women’s IPL added to the schedule.
Already some players, including the recently retired Rachael Haynes, have started to warn that the WBBL can’t be complacent as the leading names start to weigh up which competitions to put their name forward into.

“Our primary objective is making sure the WBBL remains the best league in the world,” Dobson said. “It’s fantastic that players have such opportunity around the world, but that does mean there’s a lot of cricket happening and it does require us to be mindful of that. Whether that’s the workload on our internationals or Australian players that now play more cricket than ever before.

“At the same there are so many amazing local players who underpin the strength of the WBBL so it’s a balance of all those factors. We are absolutely mindful of what the players are telling us, they are at the heart of the strength of the WBBL. Ultimately the WBBL’s goal is to be a visible pathway for women and girls in cricket so we need to make sure are delivering on that as well.”

The Women’s Hundred in the UK recently introduced a draft as part of their process for building squads for the 2023 season. The BBL had its first overseas player draft earlier this year and while Dobson did not commit to whether there was scope for it in the WBBL he said all aspects of the competition are constantly put under the microscope.

“It’s always a point of review and with a new MoU on the horizon there’s certainly an opportunity to explore different models and looking at other competitions around the world [which] is always a helpful point of comparison,” he said. “What [this season] has done is give us real momentum into the future and we just see incredible untapped upside in the WBBL.”

Andrew McGlashan is a deputy editor at ESPNcricinfo