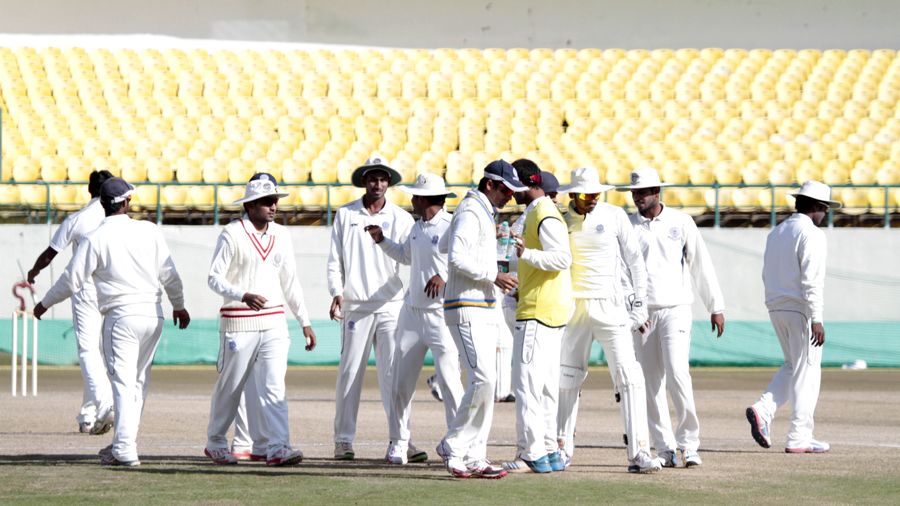 Offspinner Swarupam Purkayastha’s second five-for of the match and his fifth in consecutive innings sent Assam on their way to a comprehensive 10-wicket win against Goa in Povorim. Goa were well-placed at 82 for 0 when the day began, but were dealt an early blow as Swapnil Asnodkar and Sagun Kamat were snared early by Purkayastha. Amogh Sunil Desai fell soon after for 63, and despite a fighting 59 from Keenan Vaz at No.6, Goa could only make 268, as Purkayastha collected 6 for 76 to prevent the team from forging any threatening stand. It meant Assam needed just nine runs for victory, and they amassed that score in 1.3 overs to register their fourth victory of the season. With 29 scalps from four matches, Purkayastha is now the second highest wicket-taker this season, behind Pankaj Singh who has 34 wickets from six matches.
Jharkhand 556 for 9 dec (Jaggi 201*, Tiwary 100, Bhandari 4-136) and 189 for 4 dec (Kishan 84) drew with Hyderabad 455 (Akshath 133, Ashish Reddy 104, Quadri 73, Aaron 5-131) and 7 for 0
Scorecard
A maiden first-class century from Ashish Reddy ensured Hyderabad got within a 100 runs of Jharkhand’s first-innings total, but their 556 for 9 dec was always going to nigh impossible to overhaul and Jharkhand expectedly took first-innings points before the game was drawn. They played out 44 overs in their second innings, getting to 189 for 4, driven by 84 from opener Ishan Kishan, before declaring. Sixteen-year-old Kishan’s 84 was his second successive highest score – he scored 66 in the first innings, improving on his 60 scored against Assam last month. Hyderabad’s openers had to see out eight overs, and they did, scoring just seven.
Tripura 179 (Ghosh 78, Warrier 4-45) and 295 (Ghosh 82, Chowdhary 72*, Verma 5-61) drew with Kerala 301 for 9 dec (Hegde 82, Prem 58, Dutta 4-45)
Scorecard
Tripura held on for a draw against Kerala, but the latter claimed first-innings points from the fixture. Kerala had taken a 122-run lead before declaring, leaving Tripura over four sessions to see out to save the game, and their batsmen proved equal to the task. For the second time in the match, Bishal Ghosh was the pivot, scoring 82 off 266. Nirupam Sen Chowdhary also scored a patient half-century, and these knocks with the addition of some dogged cameos saw Tripura to safety despite legspinner’s Amit Verma’s miserly career-best five-for.

When the weather allowed play in Dharamsala, a dogged stand of 59 from 36.4 overs between Rishi Dhawan and Rashmi Parida ensured the home side did not get bowled out and allow Andhra to take three points for the first-innings lead; instead, since the first innings for both sides remained unfinished, due to the weather, each team got a point each. Andhra extended their overnight score from 301 for 6 to 336 for 8 declared, before seamer Paidikalva Vijaykumar carved up Himachal’s top order. Rishi Dhawan and Parida ensured they stayed afloat though.

The Dharamsala winter had the biggest impact on the game, and will impact Himachal’s next match too: it was set to be a home game, against Tripura, but has now been shifted to Tripura’s home venue in Agartala.