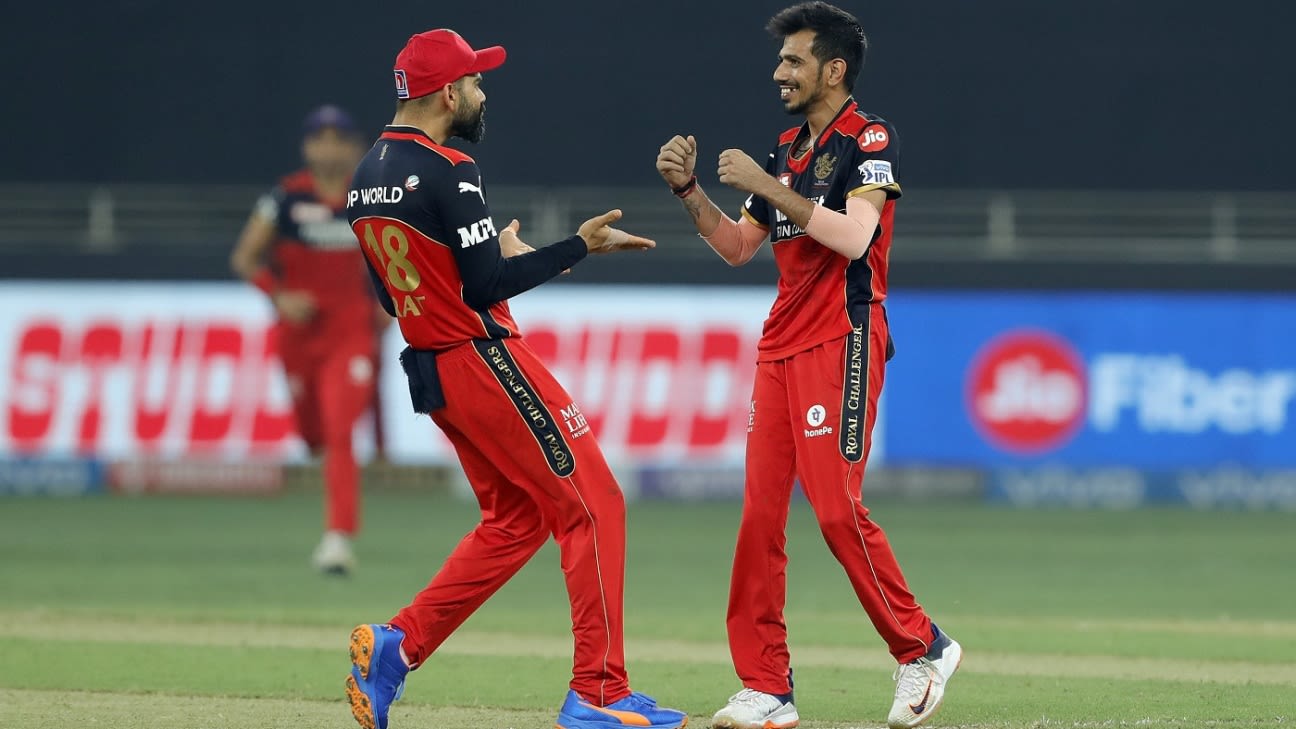 Yuzvendra Chahal hasn’t had to bother with the IPL auction much for many years now, and now that he must in just over a week, he is happy to go wherever fate takes him but would most want to go back to where he has spent his last eight seasons: Royal Challengers Bangalore. And money isn’t the clincher. “I don’t want to say I want [INR] 15 crore or something, eight crore is enough for me.”
All of Chahal’s Royal Challengers’ cricket at the team has been under the leadership of Virat Kohli, who is no longer the captain of either India or the franchise. “I know Virat bhaiyya from the Under-15 days. We played together for one year [for North Zone]. When I went to RCB in 2014, I was very nervous – on the field too,” Chahal said in a chat with R Ashwin on the latter’s YouTube channel.
“He used to be in the covers, and he was so energetic. And I was a youngster, and he sometimes got angry with me too. So in 2014, when I used to pick up a wicket those days, I used to charge towards the batsman to show my aggression. That happened two-three times, and the match referee spoke to [the coach] Daniel Vettori.

“Then in one match, I said something bad, and Vettori sir came to me and said, ‘This is not good, you have the potential but if you can change this thing… if you want to run [after picking a wicket], you run towards the covers, to Virat bhaiyya, and say whatever you want to – Virat won’t mind’.

“I realised that he [Kohli] had a lot of positive energy. He never tried to change me, he never asked me to bowl this way or that way. We always had two plans, and the first plan was always mine. He would tell me, ‘You plan the way you want to bowl.’ It helped me because I have to bowl, so it helped to think about it, [and] get the field I wanted.”

“Sometimes I told him to set whatever field he wanted, so he said, ‘Okay, I will make a couple of changes, you bowl the way you want’. That gives you confidence when a big player – your captain – supports you. In some matches when I gave away runs, he would come running from the boundary to tell me, ‘No problem, you carry on, you will bounce back’. So that boosts you.

“He is my senior, but the brotherhood we have, the eight years I have been with RCB – whether off the field or on the field – [means] I can ask him [for] whatever I want, whether it’s something personal or whatever. So there is a bond, which helped me bowl well under him.”

And with the mega auction scheduled for February 12 and 13, Chahal hopes he can resume his IPL duties for Royal Challengers.

“The journey for eight years [with Royal Challengers] has been memorable. There is no right to match [which the franchise used to retain him in 2018] this time, so I will go to whoever pays the most for me,” he said. “This is the first time where I might end up going to another team because there is no right to match. I am ready to go to any team. As a professional player, you should be ready to play for any team.

“Obviously, I want to go to RCB again. But I won’t feel bad if I go somewhere else. All of them have to build new teams. Whoever takes me, I have no problem. I will continue to give my 100%. But yes, when you go to a new franchise, it takes a little time to adjust. But that’s why we call ourselves professional players.”

Chahal has been one of Royal Challengers’ core players over the years after moving there from Mumbai Indians prior to the 2014 season. In 113 matches for them, he has picked up 138 wickets at an economy rate of just over 7.50. These are good figures in any circumstances, but even more impressive when one considers that he has played a large chunk of his IPL matches – 41 out of 114 overall – at the M Chinnaswamy Stadium in Bengaluru, which is famously small, and a ground where high totals are the order of the day; the average first-innings run rate there is 8.75, the highest among venues to have hosted at least 20 matches in the IPL.

“I didn’t have much experience [in 2014], and I had watched even very good spinners getting hit at that ground,” Chahal reminisced. “Then Vettori sir told me, ‘This is a small ground, as you know, so you have to go for wickets. If you give 30 runs in four overs, I want one wicket. If you go for 35 runs, I am happy with two wickets. If you go for 40, make sure you get three wickets.’ So I realised the importance of wickets on that ground.

“I had played only a few Ranji Trophy matches, but doing well in IPL gave me confidence that I would be able to survive in this league”

“I asked him if I should stick to my strengths – I flight the ball, I vary my pace. He said, ‘Yes, go for that.’ I realised after the season that if you get a wicket, you get three-four dot balls after that.”

He calls Bengaluru his “second home”, and it is not just because of the eight years of memories of the IPL, but also the experience with the city’s fans, who Chahal said were different from other cities: “they are behind you even if you are seventh on the table, they never abuse”.

Not to forget the India call-up in 2016 after a good IPL season, where he picked up 21 wickets in 13 games. “I think it’s all because of RCB. They gave me a platform to prove myself,” Chahal said. “And once my journey started, when I got confidence as a bowler… I had played only a few Ranji Trophy matches [until then], but doing well in the IPL gave me confidence that I would be able to survive in this league.”

“When I went to the training sessions, Vettori sir made me bowl in open nets. I got the first over. I got the 20th over,” he recalls. “They made me bowl a lot to left-handers. Then in 2018, they picked me in the right to match [card]. I was in South Africa at that time.

“Kuldeep [Yadav] and I were watching the auction together. My name came at No. 9 and his came at No. 10. I was nervous about how much I would get. But I was confident they would buy me back with the RTM card [which Chahal said the franchise had told him]. So I was very happy to get back to RCB.”