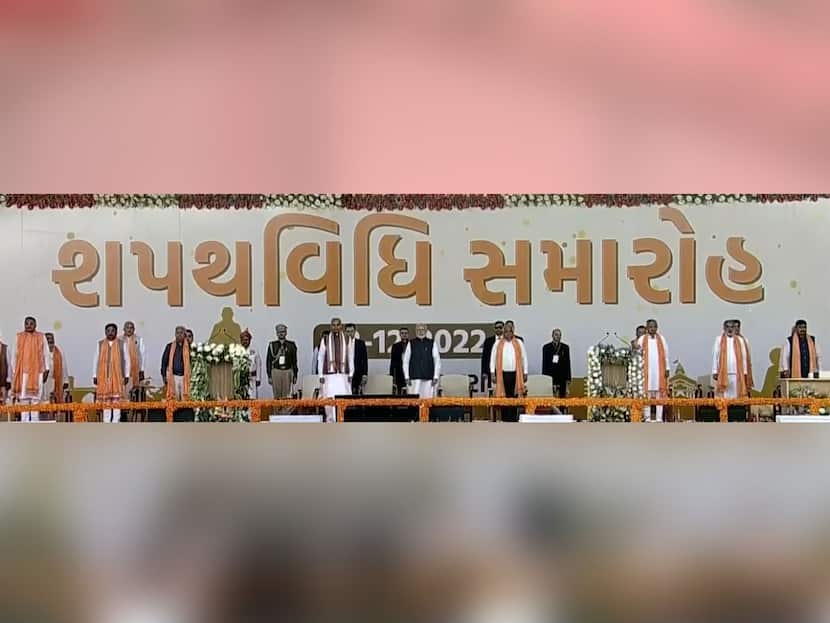 Gujarat CM Oath-Taking Ceremony Live:  At least 20 chief ministers from BJP-ruled states are anticipated to attend when Chief Minister Bhupendra Patel takes the oath of office for the second time in a row on Monday, at a spectacular ceremony in the state capital attended by Prime Minister Narendra Modi and Union Home Minister Amit Shah.

Governor Acharya Devvrat will administer Patel’s oath as Gujarat’s 18th chief minister at a ceremony to be conducted at the Helipad Ground inside the new secretariat complex in Gandhinagar. The new ministerial council will also be sworn in at the event.

The function is expected to be attended by BJP national president JP Nadda and 10-15 government ministers.

The party won 156 of the total 182 seats in the recently concluded Gujarat Assembly elections, giving it an unprecedented lead and its eighth straight victory. The main opposition party, Congress, could gain 17 seats, while the Aam Aadmi Party (AAP) won five seats in the state legislative assembly.

A committee of IAS officials is monitoring the preparations for the swearing-in ceremony, for which a temporary building with a capacity of 20,000 persons has been built at the helipad field.

Party office-bearers from the taluka and city levels are scheduled to attend the swearing-in event. Sitting and past MPs and MLAs from the party, office-bearers of various morchas, chairmen/vice-chairmen and directors of APMCs, gramme panchayat sarpanches, and Jan Sangh veterans are also anticipated to participate.

Several national level figures were brought in for campaign carpet bombing during the party’s election campaign in Gujarat.

Bhupendra Patel resigned as Chief Minister on Friday, paving the door for a new administration to be led by him once again. According to party insiders, the next Gujarat administration would include some fresh faces.

Patel was voted as the head of the BJP parliamentary party by the elected MLAs on Saturday after winning the assembly election from Ahmedabad’s Ghatlodia constituency by a margin of 1.92 lakh votes.